Should Tesla do anything about Elon’s tweets?

Twitter enables immediate communication. Anyone with a Twitter account can speak to the world. One of the consequences of this is that boardroom directors can speak directly to customers, staff, other boardroom directors and, indeed, any and all stakeholders. Is this a good thing? In this short discussion, let’s use the example of Elon Musk and ask – should Tesla do anything about Elon’s tweets?

On 7th August 2018, the CEO of Tesla sent the following two tweets, surprising the tech world with what appeared to be a fait-accompli regarding fundraising and taking the company private. 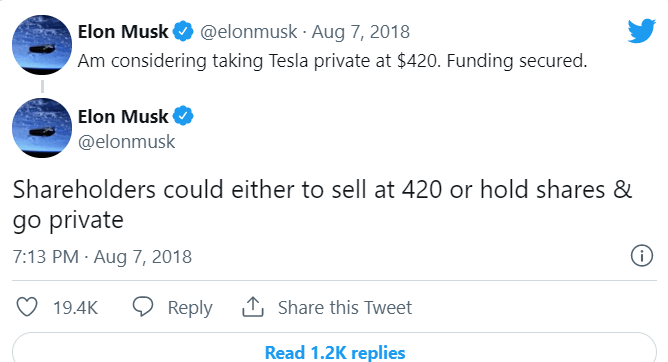 Musk later tweeted that investor support for the plan was “confirmed” but contingent on a shareholder vote.

At the time, Tesla was under pressure from Short Sellers of the TSLA stock, and Musk was rightly pi**ed off with the stock market dynamics and shareholder manipulation (to say the least).  Here’s what he had to say at the time:

“As a public company, we are subject to wild swings in our stock price that can be a major distraction for everyone working at Tesla,” he wrote. He also blamed the “quarterly earnings cycle,” which puts “enormous pressure on Tesla to make decisions that may be right for a given quarter, but not necessarily right for the long-term,” and the large number of short sellers “who have incentive to attack the company.”

(Note that, since August 2018, the Tesla stock price has increased over 10-fold!)

Elon Musk is an incredible innovator with a fierce work ethic and is a big picture dreamer.  Stylish electric cars and space travel for the ordinary Joe Soap (with a big bank balance) are part of that dream.

Like many US firms he is the Chair (President), CEO and the largest shareholder.

Musk was fined as a result of these tweets.

In February 2019 (6 months later) Tesla said that it “substantially paid by the end of 2018” the pretty small $30 million in settlement and legal expenses related to Musk’s public statements about a plan to take Tesla private, which did not materialize.

So, what’s going on here? In short, the board of directors allowed another member of the board to make a unilateral decision to communicate with the market, which resulted in altering the share price (to his personal benefit).

Over a year later, in December 2019, Musk stated that his net worth was approximately $20 billion.  Today, Forbes estimates his personal worth in excess of $140 billion.

His tweet to say he was going to “take the company private with funding secured” raised a few eyebrows, not only with his board but with the investment and regulatory communities.

So, in retrospect, did he do the right thing or was he simply manipulating the markets for his own personal gain?

And what should the board have done about this (at the time they effectively did nothing)?

Here are a few things that they might have considered as part of the process.

There is no easy solution to this matter.  Elon Musk is an entrepreneur, an innovator and value creator, so one will want to keep him motivated and focused. His skill set is probably not being the Chair of a public company and all that goes with it. So, some compromise must be found to rebuild trust in the governance of the organisation.

Nearly two years after the above tweets, on May 1st 2020, Elon Musk was in the bad books once again when he sent out the following tweet, stating that the Tesla share price was too high.

This tweet caused many investors to exit the company, wiping $14 billion off the company valuation.

Perhaps the correct action, therefore, was indeed to do nothing.  Maybe Musk’s tweets simply balance things out in the end, with the shareholders (and Elon Musk) being the main benefactors as the value of the company continues to rise.

Is there a compromise somewhere between Twitter and directors?  Should communications be limited? Is Twitter simply just another sales channel for directors and leaders?

What do you think?

Once thing that did happen as a result of the tweets in August 2018, triggering an SEC probe, is that Elon Musk stepped down as chairman of Tesla.

Apple and Disney under fire from anti-ESG activist

Procter and Gamble faces backlash over board appointments